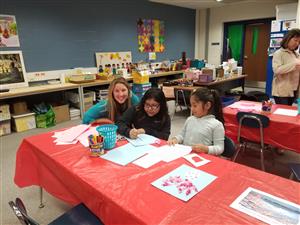 On Tuesday, April 23rd, Maercker School District held its annual Cultural Festival at Holmes School in Clarendon Hills. Maercker School District serves families in Clarendon Hills, Westmont, Hinsdale, Darien and WIllowbrook in Dupage County. Each of these communities are culturally diverse and that is reflected in all three of the district’s schools.

Maercker PTO spends months planning this event, having formed a committee specifically for planning it. The parents involved spend time soliciting vendors, planning activities, gathering event volunteers and getting staff students and teachers involved. This culminates in the exciting event that happened on Tuesday.

The event was a smorgasbord of food, activities, crafts, student performances and information. Holmes School was brimming with students and parents, some dressed in their own traditional clothing. Upon walking in, visitors were greeted by volunteers who invited them to enjoy a dance performance, view displays of items from around the world, and sample food — so much food. Arts & crafts activities included Japanese Cherry Blossoms, Brazilian headdresses and Indian henna tattoos. Mrs. Quirk, principal at Westview Hills, hosted bingo for the evening.

Early in the evening, there was an open gym where students (and parents) were encouraged to bust a move. Later, families were treated to an intricate Maharashtran dance called a Lavani by Seema Gadre, Shubrhra Moudgil and Hanitha Puranam. After the Lavani, all students were invited back to the floor to compete in a Fortnight “Flossing” contest. Attendees were able to purchase tickets for sampling from the dozens of ethnic dishes from all over the world from Lithuanian donuts to Jamaican hand pies to Filipino lumpia.

Dozens of District 60 families enjoyed various ethnic dishes served up by parents, students, and staff. Elizabeth Ojeda, 3rd grade teacher at Maercker School, volunteered in the tasting area for the first time after having served in other areas in years past. She was pleasantly overwhelmed by the diversity she could see in the room, which she felt reflected her own classroom – where students are native speakers of nine other languages. Noting that it’s important for D60 to be visible and active in its community, Ojeda also remarked, “This event is important [for D60 families] because it shows them how welcoming this district is for them and allows them to interact with one another.”

Maercker D60 serves a diverse community and seeks to give its families the opportunity to share their cultures with others. The annual cultural fest is an educational and enriching experience that everyone benefits from. Maercker 60 is thankful to all families, volunteers, donors and especially the PTO who continues to bring events like this to the Maercker community.

The information contained in this website is for general information purposes only. The information is provided by Maercker D60, and while we endeavor to keep the information up to date and correct, we make no representations or warranties of any kind, express or implied, about the completeness, accuracy, reliability, suitability or availability with respect to the website or the information, products, services, or related graphics contained on the website for any purpose. Any reliance you place on such information is therefore strictly at your own risk.
Copyright © 2002-2020 Blackboard, Inc. All rights reserved.